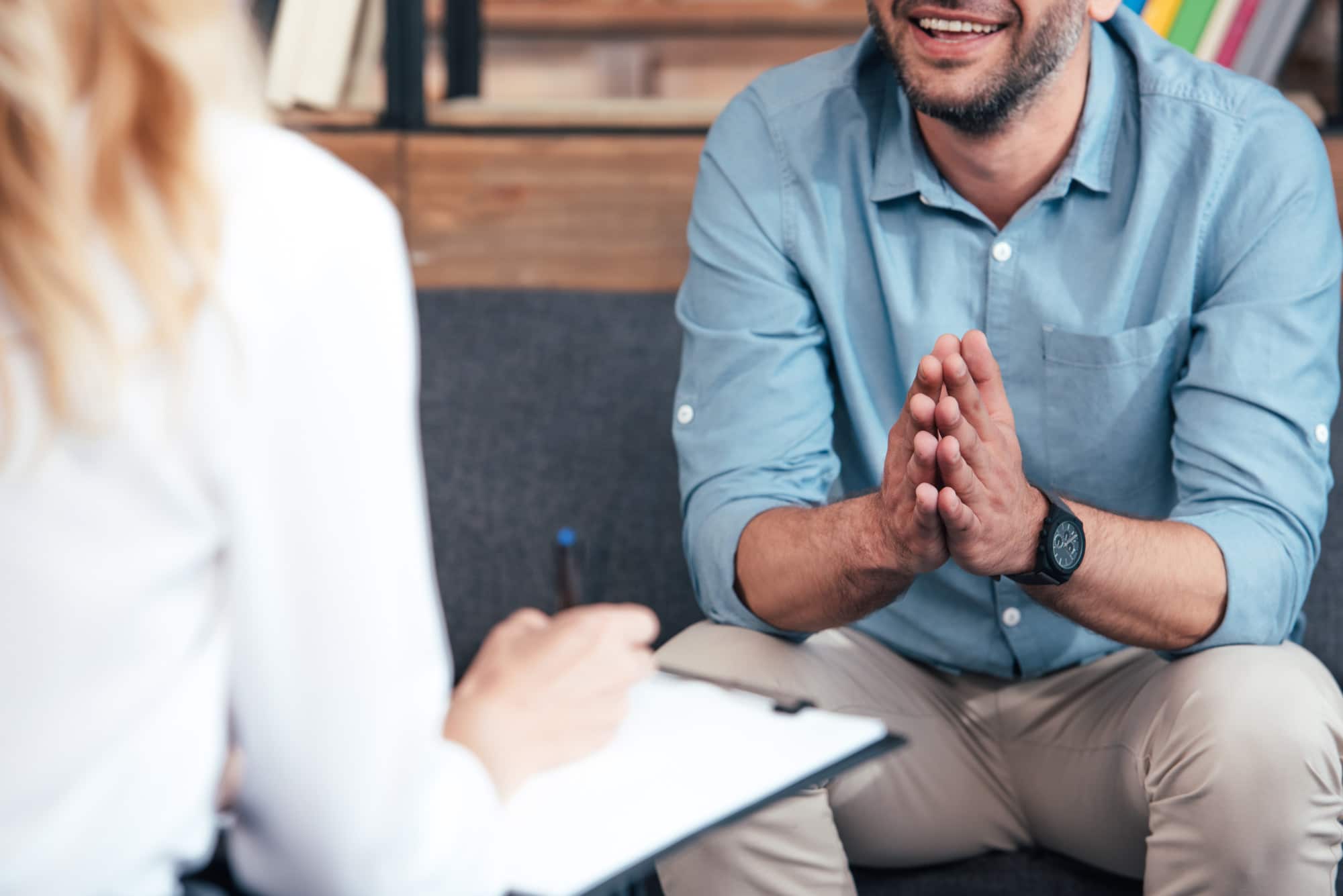 It’s no secret that opioid abuse and addiction are major problems in the United States. Millions of people are affected every day by opioid addiction. What makes opioids so much more dangerous than other substances of abuse, is how quickly someone can get hooked on them and the potential for overdose and even death. When it comes to heroin specifically, one of the potentially dangerous side effects can be nodding off or the “heroin nod.”

While it might seem innocent enough, simply nodding off or passing out, it can actually be the result of an overdose or even lead to serious medical issues, including death. In this blog, we will take a deeper look at what the “heroin nod” is, as well as discuss why it occurs, how it relates to an overdose, and how you or someone you know can get help if they are suffering from a heroin addiction.

Before getting into the “heroin nod,” it’s important to have an understanding of what heroin is and how it works. By definition, heroin is an opioid drug that is made predominantly from morphine. Morphine is a natural substance that is found in the seed pod of various types of opium poppy plants. These plants are mostly grown in Southeast and Southwest Asia, although they can also be found in parts of Mexico and Columbia as well. Heroin is mostly found in powder form, and the powder tends to be either white or brown, although in some cases, it can also be found in a black sticky substance.

People typically ingest heroin by either snorting, sniffing, or injecting it. It can, however, be smoked in certain situations. Once heroin enters the system, it immediately latches on to the opioid receptors in the brain, specifically the ones associated with things such as feelings of pain or pleasure.

What Are Some of the Most Common Side Effects of Heroin Use?

Like many other types of opioids that are used in ways other than directed, many people take heroin in order to experience intense feelings of pleasure and euphoria. While at the time, the person who is on heroin might feel great enjoyment, as it begins to wear off, they might start to feel the opposite effects, leading them to take more. After a while, the brain becomes so reliant on heroin, that it needs it just to function.

When someone takes heroin, they might begin to experience the following short-term side effects almost immediately:

The more frequently someone takes heroin, the more significant and severe the side effects get. Over time, they might begin to experience some long-term effects, including:

In addition to these side effects, many people who choose to ingest heroin via injection tend to share needles and other drug injection paraphernalia. This can increase the risk of contracting a disease such as HIV or hepatitis.

What is the “Heroin Nod?”

You might have noticed that one of the short-term side effects of heroin usage is nodding off. This is also known as the “heroin nod.” When someone takes heroin, they experience that initial rush of euphoria or pleasure. However, once it begins to wear off, it is typically followed by a period of drowsiness. In fact, after taking heroin, a person can alternate in and out of consciousness for hours.

Unlike many of the other side effects of heroin usage, this is the one that tends to get overlooked the most while also having the potential for being the most dangerous. After all, who hasn’t struggled to stay awake after a night of not sleeping well, even going so far as to potentially nod off at your desk or while doing another activity. What makes the “heroin nod” so dangerous is that while to an outsider it might just look like the person is tired, in reality, they could be actually overdosing on the heroin and nobody would have any idea. 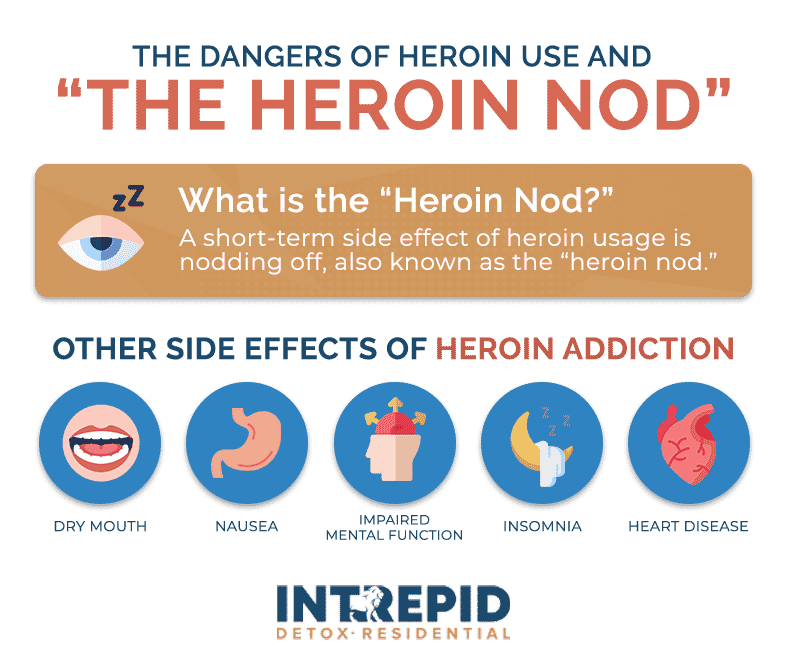 Can This Happen With Other Types of Drugs?

While certain types of drugs might have side effects that can make a person drowsy, the “heroin nod” is specific only to opioids and tends to occur most commonly with heroin usage. To take it one step further, it most commonly occurs when heroin is ingested via injection. This is due in large part to the fact that when heroin is injected, it goes straight into the bloodstream, allowing it to take effect much quicker. Since opioids are a central nervous system depressant, that rush of euphoria can essentially cause the body and mind to become so relaxed that it passes out. As the body and brain become more and more tolerant to heroin or other opioids, it takes more and more to get to the point of nodding off, thus increasing the likelihood that an overdose can occur at that time.

Heroin is a substance that can cause individuals to develop an addiction from one time use. Therefore, if someone is nodding off from heroin use, it is imperative they find treatment as soon as possible. In fact, the more frequently someone experiences the “heroin nod,” it likely means that they are taking an increased amount. This indicates that a tolerance level is being built up in the system, which, in turn, indicates that an addiction is either being formed or has already occurred.

What Are Some Other Signs of Heroin Addiction?

As is the case with other opioids, heroin is highly addictive. Furthermore, as the body becomes more and more tolerant to it, it requires more and more of it to reach its desired effect, increasing the chances of an overdose or significant medical complications. While we touched on some of the side effects associated with heroin usage, there are also some physical and behavioral signs that you or someone you know might be dealing with a heroin addiction. Some important things to look out for include: 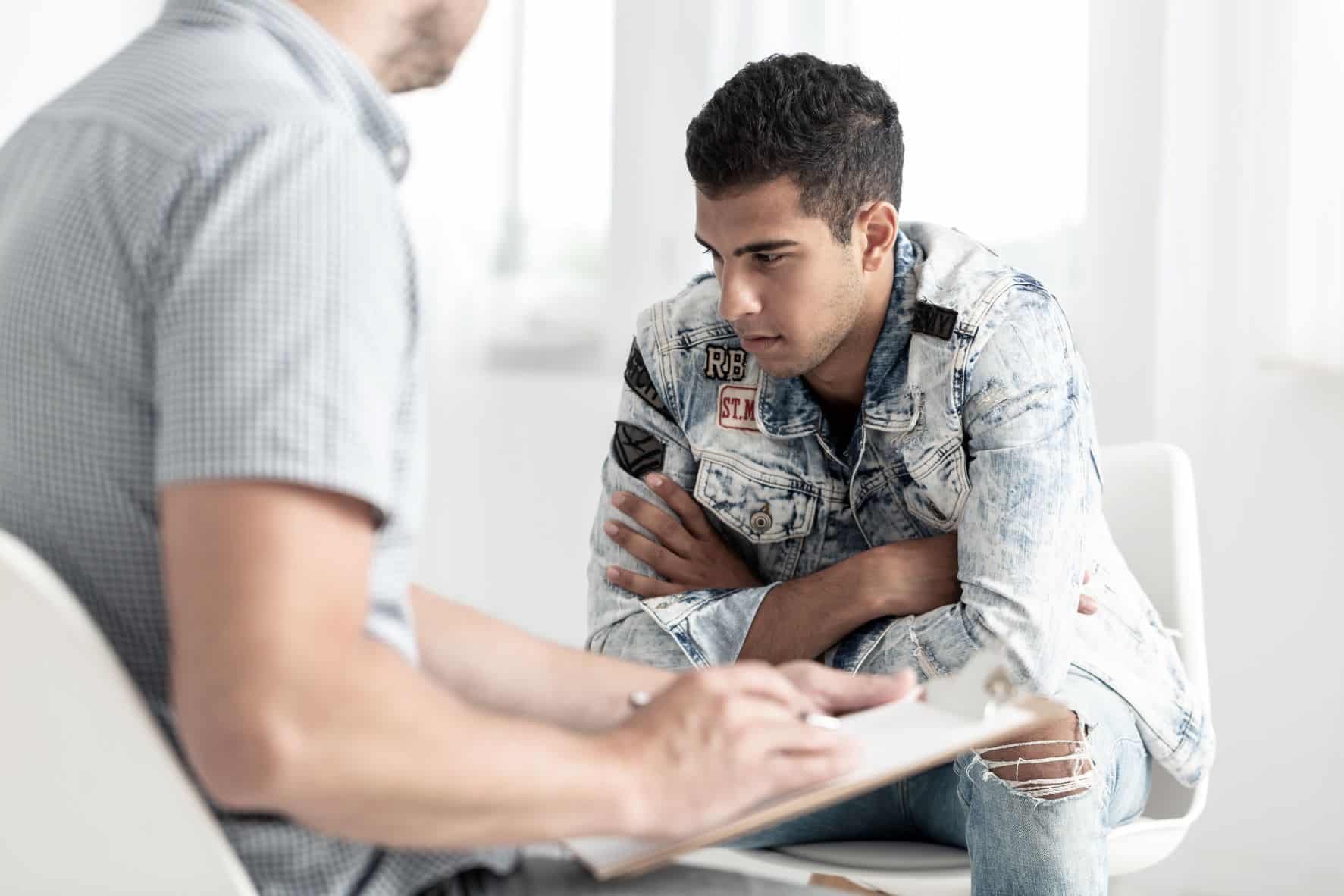 If you or someone you know is suffering from heroin abuse or addiction, the good news is there are ways out there that you can get help.

The first step in this process is to detox off of heroin and any other harmful substances that might be in the body. After all, without ridding the body of these substances, it can not begin to heal. The withdrawal symptoms associated with heroin addiction can be severe. Therefore it is imperative that detoxing be done under the care and supervision of trained medical professionals. This can be done at either a local medical facility, a dedicated detox center, or a treatment center that also offers detox services like Intrepid Detox & Residential. Some of these withdrawal symptoms include:

As a result, attempting to self-detox can be incredibly dangerous and even life-threatening. Additionally, it can lead to an increased risk of relapse because the withdrawal symptoms can be so severe that a person might turn back to heroin to alleviate them.

Once detox has been completed, the next step is to begin treatment. This can be done in either an inpatient or outpatient capacity depending on what your treatment professional recommends. In the early stages of treatment, your might be put on a medication such as buprenorphine or methadone to help with some of the severe withdrawal symptoms. Another successful treatment method for heroin addiction is cognitive-behavioral therapy, also known as CBT. CBT helps you to understand what led to your addiction-forming in the first place and also helps re-train and reprogram the brain, so it no longer thinks that it needs heroin in order to function properly.

Have You Experienced “The Heroin Nod?”

While nodding off might not seem like too big of a deal under normal circumstances, if it is related to opioid or heroin use, it can be a very big deal. Nodding off after taking heroin can lead to the body shutting down and an overdose occurring. If you or someone you know is suffering from heroin abuse or a heroin addiction, give us a call today as soon as possible. We will work with you to get the help that you need so that you can go on to lead a happy, healthy, and sober life.