Stimulant Detox and Withdrawal in Florida

Choosing recovery over stimulant use is the first step to a better life. While many people try to quit on their own, they quickly relapse. Because stimulant withdrawal can cause uncomfortable and often severe symptoms, stimulant addiction treatment begins with a medical detox program.

What Are Stimulant Drugs?

Stimulants are a drug class that increases the activity of neurotransmitters in the brain. They also produce heightened energy and alertness. Stimulants such as Ritalin are prescription stimulants. While illicit stimulants include cocaine and methamphetamines.

Cocaine is an illicit drug made from the coca plant. This plant is typically found in South America. Cocaine absorbs rapidly into the bloodstream no matter how it is consumed. For instance, cocaine can be taken orally, snorted, or injected.

Because the body absorbs cocaine quickly, the “high” is generally short-lasting. Typically, the “high” lasts about 30 to 60 minutes. For this reason, cocaine is often consumed in large doses to avoid “coming down” or losing the high. This cycle often leads to dependency and addiction.

Similar to cocaine, when meth is smoked or injected, it causes a rush of dopamine. This increases heart rate and blood pressure and creates a euphoric sensation. Snorting meth, however, produces euphoric feelings without the rush.

Injecting meth creates the strongest effects that can last up to 30 minutes. However, after the rush, the high can last eight to 24 hours, depending on how it’s consumed. Staying up for days is a common sign of bingeing meth.

Ecstasy is the street name for MDMA or 3,4 methylenedioxy-methamphetamine. It is an illegal synthetic stimulant with hallucinogenic properties. The feelings of well-being, happiness, and friendliness make this drug popular.

The effects on a user’s sight, smell, sound, and touch make ecstasy use common at raves and dance parties. While the high often lasts eight hours, the effects lead users to take more than a typical dose. But, overdosing on this drug can lead to foaming at the mouth and potentially fatal seizures.

Although not everyone misuses Adderall, using more than prescribed can lead to dependence. As a result, the brain and the body will not function without it. A tell-tell sign of needing Adderall stimulant addiction treatment is mental fog and physical exhaustion without the drug.

Ritalin is a prescription stimulant similar to cocaine. It also helps those with ADHD and narcolepsy. Ritalin has calming effects and increases focus when taken as prescribed.

However, Ritalin has a high potential for abuse. When taken recreationally, it is often taken at dangerously high doses. Furthermore, users may snort or inject the drug for faster effects. This can lead to severe and possibly fatal consequences.

How Does Stimulant Use Affect The Body and Brain?

Those who use stimulants feel a “rush” along with:

What Are The Signs and Symptoms of Stimulant Addiction? 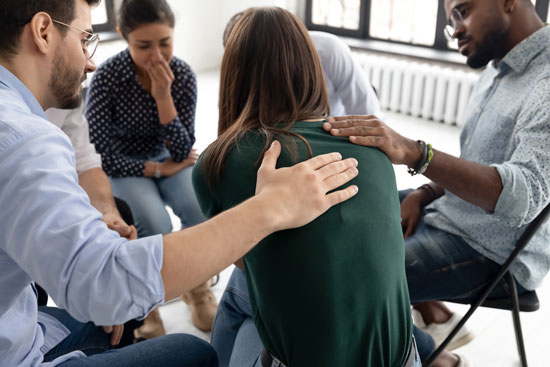 What Are The Signs And Symptoms of Stimulant Withdrawal?

Stimulant withdrawal may be a little different for each person. The symptoms depend on factors such as the length of addiction, the typical dose, and the mode of consumption. However, stimulant withdrawal is characterized by feeling unhappy or dysphoric and two or more of the following.

How Long Does Stimulant Withdrawal Last?

Stimulant withdrawal symptoms generally begin within a few hours to several days after the last dose. While the most intense symptoms typically peak a week after last use. Some symptoms, such as depression, however, may last for weeks or months.

Within 24 to 72 hours after the last dose, symptoms of stimulant withdrawal begin. Typically the symptoms include anxiety, body aches, fatigue, and a general feeling of unhappiness. Cravings may also start as well as trouble sleeping. Heavy stimulant users may also experience paranoia, panic, and hallucinations.

Typically, symptoms of stimulant withdrawal last around seven days. As most symptoms begin to subside, cravings may be the most intense. Sometimes, symptoms of severe depression and extreme fatigue may be present.

At this point, most symptoms are fading away. But, some may still experience depression and insomnia. As a result of insomnia, some people may struggle with excessive sleeping or hypersomnia.

Symptoms lasting two weeks or more are called post-acute withdrawal symptoms or PAWS. PAWS may include symptoms of anxiety, depression, trouble sleeping, irritability, and fatigue. While the severity of symptoms will decrease over time, they often last 12 to 18 months.

What Happens in Detox?

What Happens After Stimulant Withdrawal Treatment?

Inpatient or residential treatment is a live-in facility that offers 24-hour supervision. Furthermore, inpatient stimulant addiction treatment typically lasts 28 to 90 days. However, it can last longer for those who need it.

While in stimulant addiction treatment, the main focus is on the psychological aspect of addiction. Because addiction commonly co-occurs with mental illnesses such as depression and post-traumatic stress disorder, a complete evaluation must be performed. Co-occurring disorders, also known as a dual diagnosis, must be treated at the same time to ensure a full recovery.

Psychotherapy or individual therapy involves the person in treatment and the therapist. The therapist provides a safe space allowing for trust to be built. This trust enables people to be open and honest about their addiction and mental health struggles.

Benefits of psychotherapy include:

In group therapy, people learn from each other while building healthy communication skills. A therapist leads the same group of typically three or four people but can be as many as 12. The therapist generally picks a different topic for each session, allowing the group to discuss their experiences.

At Intrepid Recovery, we help those in South Florida find freedom from drug and alcohol addiction. Our comprehensive treatment programs and caring staff provide you with cutting-edge treatments to help you achieve and maintain recovery.

If you or a loved one is fighting an addiction, the time to get help is now. Contact us today and start your recovery journey.